Congratulations to the successful teams in the Open and Women’s trials held over two weekends in January and February to determine the Irish representatives at two major events this summer – the European Teams Championships in Madeira, Portugal, in June and the World Bridge Games in Salsomaggiore, Italy, in August/early-September.

The Open winners were the team of Mark Moran, John Carroll, Tom Hanlon, Hugh McGann, Nick FitzGibbon, and Adam Mesbur, with NPC Grainne Barton.
The Women’s trials was won by the team of Teresa Rigney, Diane Greenwood, Joan Kenny, and Jeannie Fitzgerald, who will be joined by a third pair to be selected by the IBU International Committee.

I’m sure you will join us in congratulating the victors and wishing them well in the championships for which they have qualified. And thanks to Fearghal O’Boyle and John Royds for directing the two trials weekends.

Congratulations are also due to Diarmuid Reddan, who was the only one of fifty participants in the recent EBL Tournament Directors’ Workshop in Belfast to achieve the grade of A+. Well done Diarmuid! 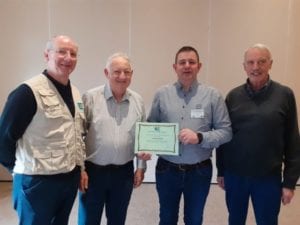