Many congratulations to the newest additions to the ranks of Irish grandmasters, as Lucy and John Phelan become the twenty-seventh and twenty-eighth individuals, and the second married couple, to attain the most elevated level in Irish bridge.

The pride of Waterford, Lucy and John have won most of the major championships. As a pair, they have won the Spiro Cup twice, the IBU Pairs and the Moylan once, and have featured on four Coen Trophy winning teams. In addition, John has been victorious in the Revington, and Lucy in the Jackson and the McMenamin, with different partners (obviously). A friendly and engaging couple, they are generally very popular opponents – and would be a lot more popular if you could even occasionally manage to get a good score against them! The behaviour of married couples at the bridge table often attracts attention for the wrong reasons; Lucy and John had the distinction of being written up in The Spectator, no less, precisely because of their courtesy and understanding in a situation where they had combined to miss an opportunity in defence.

Together, they represented the CBAI in the Camrose Trophy, while Lucy has played for Ireland in the Lady Milne on several occasions, and they have travelled to various open championships, where they have represented us with some distinction. In addition, both have made a contribution to the development of future bridge players, in Lucy’s case as a teacher, and in John’s as a mentor to some of our promising juniors.

Under normal circumstances we would mark Lucy and John’s elevation to grandmaster by presenting them with silver salvers on behalf of the Association at the next major competition. For now, we will have to recognise their achievement virtually, so we would ask you all to join us in congratulating them heartily. 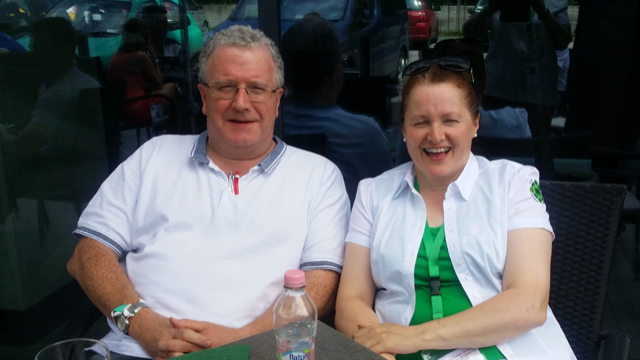