Many congratulations to Ranald Milne, who has recently ascended to the rank of grandmaster, becoming the 27th member of that elite group within the CBAI.

Originally from England, Ranald moved to Dublin for work reasons in the 1980s, and quickly established himself on the local bridge scene. His most notable partnerships have been with Joe McHale initially, and BJ O’Brien latterly. Known for his calm table presence and an affable and courteous demeanour, Ranald has won all the major national competitions, and has represented Ireland at both Open and Senior levels, including at the D’Orsi Bowl (senior world championships) in China in 2019. He is also a very well-regarded bridge teacher, who has inspired great devotion and loyalty among his large body of students. He and Catherine recently left Dublin for the greener pastures of county Clare, but thus far he has retained his Leinster allegiances.

Under normal circumstances we would mark Ranald’s elevation to grandmaster by presenting him with a silver salver on behalf of the Association at the next major competition. For now, we will have to recognise his achievement virtually, so we would ask you all to join us in congratulating him. 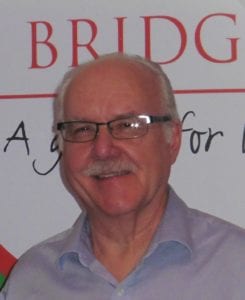